Last night I went out with my old friend Lisa, her boyfriend Jonas, and about 12 of their friends for a casual dinner at a restaurant whose name I couldn’t pronounce, (and will not attempt to spell out now) to partake in their specialty: Fried Chicken. Now let me preface this by saying, I know a thing or two about fried chicken. I know the difference in great fried chicken and mediocre fried chicken. I know there is no such thing as bad fried chicken. I know some of the best fried chicken is made in 5-piece batches in a single fry-daddy in a Dublin, Georgia gas station by a sweet, old black lady called “Momma Dot.” I’ve never met a battered bird I didn’t like.

With that said, I was skeptical. Admittedly, I found myself questioning a German’s ability to properly prepare and execute the mighty, signature dish of the south which we so proudly boast back home. But naturally, I could never deny the chance to eat a golden crispy clucker. 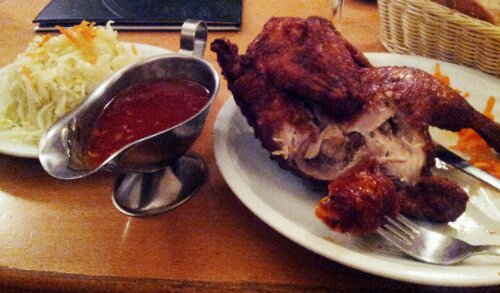 The Germans surprise me again.

This delicious bird was fried whole, batterless, then cut in half. Skin on and perfectly cooked, the meat fell from the bones like cold butter sliding down a hot knife. It was beautiful. I can’t honestly compare this chicken to our southern buttermilk soaked, seasoned flour dredged pieces back home because it was clearly so different. It would be like comparing a Pilsener to an IPA; both beer by definition, totally different in style. But I enjoyed it thoroughly, with a tangy side of krautsalat, or cabbage salad closely resembling a vinegar based cole slaw. It was perhaps my favorite meal thus far. (I’m sure you’ll read that often in the coming weeks.)

If you’re wondering why the “after” photo of my chicken looks like it was mauled by the beast of the east, that’s because my starvation-stricken alter ego closely resembles the whirring, spitting, rabbit-hungry wombat known as the Tazmanian Devil. Paired with a paranoia about my “different” American table manners being scrutinized in a room full of Europeans, I had great difficulty devouring my hen without flinging bones and cabbage across the table. It was quite challenging to fight my natural urge to sink my fingers in and pull it apart at the joints, but begrudgingly I tackled this baby with fork and knife. I will note, I’m sure no one was concerned with my style of eating nor did anyone give a shit whether or not I kept both hands above the table while consuming my dinner. But as Lisa pointed out to me earlier, Europeans are fairly observant creatures and tend to notice when your habits scream, “Hey everyone! Look at me and how American I am!” Apparently, while I was being taught to cut a bite of steak, put it in my mouth, set my utensils by my plate then chew quietly, Europeans were being told to hold both utensils above the table and never place one or both hands in your lap while eating. To me, this looks like the style of starving Vikings sitting at the dinner table, with clenched fists around a fork and a knife, pounding the table in feasting chants. While I’m recalling my dear mother cursing the presence of my arm on the table, any prestigious European is watching me rest my silverware on my plate between each bite, rest my hands in my lap as I chew, and wonder “Now where are her hands and why is she hiding them?” One of many interesting differences in a vast array of cultures.