After a somewhat stressful journey from Berlin, I did finally arrive in the quaint, small town of Wesel. This tiny bump on the map is by no means a popular destination and I’m fairly certain I’m the first female nomad strapped to a pack this quiet town has seen in some time. Nevertheless, I stopped through to meet a wonderful woman called Heike, a dear friend of my cousin Ginger. When planning my trip I noticed that Wesel could be a stopping point between Berlin and Amsterdam or Berlin and Brussels, so I penciled it in and was cheerfully welcomed with open arms by one of the greatest hosts I’ve ever encountered. Heike has been a genuine delight. We’ve shared unyielding conversation and I’ve all but sworn my allegiance to her lifestyle and desires to explore every corner of this world. If I was in need of any further inspiration to omit schedules and redundancies from my life, I found it here.

Upon my arrival, Heike suggested we take part in a common German pastime: bicycling. Cruising along flat, winding roads, recently paved specifically for a more pleasant biking experience, I got to enjoy the countryside I had been eagerly anticipating after nearly two weeks of city chaos. 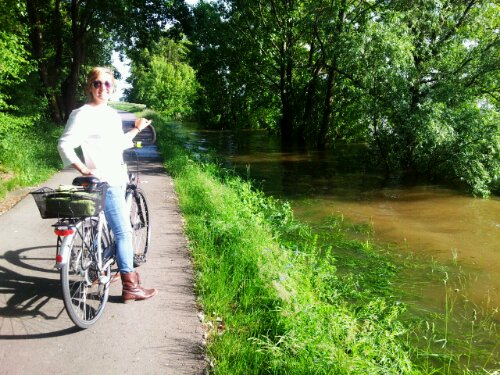 Thankfully the sun decided to join us for the stroll to try and soften the hard feelings I began to develop when he dumped me and remained in hiding 6 long days of my life.

Then today, I went to Köln, also known as Cologne. (I have access to a German keyboard right now and I assume it’s slightly blasphemous to consciously avoid the correct lettering.)

I took plenty of pictures of this gorgeous cathedral on my dslr, but I won’t bore you with those photos. Yes, yes… it’s lovely. But what I discovered around the corner from this perfectly designed, cloud-kissing beauty was a bit more exciting…

Doesn’t look too interesting yet, maybe… but what is this medievalesque structure…? 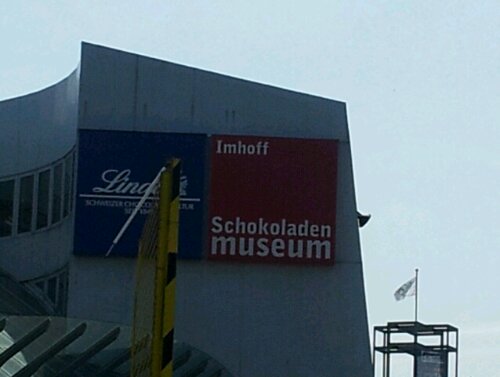 That’s right folks. I found a museum fully devoted to that magic bean that we all know and adore as CHOCOLATE. A building created in 1900 to display and praise that football shaped pod filled with little nougats of edible gold (which is honestly a pretty unsightly bean, closely resembling a rotten husk full of 3-inch larvae). But I digress… I must first warn you: if you are currently dieting, licking the wounds of a dreaded break-up or suffering from the curse of Eve, you may need to stop here and return to my blog later when you can maintain composure and not gnaw off your wrist watch while reading this. You’re entering the danger zone my friends. And since I’ve now disclosed a warning, I would appreciate if you could refrain from blaming me for your inevitable eater’s remorse after you scarf down that family size bag of peanut butter M&M’s.

And this is where it began. The ticket was 5 euros and included a chocolate replica of the museum on a lollipop stick upon entry. To my unforgiving amazement, the two pompous imbeciles in front of me scoffed at the price and walked off. Surely they didn’t notice the chocolate architectonic lollipop awaiting them at the door, because what FOOL would turn that down? When I walked through the doors, devouring the milk chocolate castle like a teething infant, I darted through the rooms of cocoa history and wrapping techniques until I found the production rooms.

Grinding wells and vibrating racks, sugar boilers and conveyer belts churning out mini bricks of silky decadence. I guess my drool covered chin was noticeably dragging the floor behind me because this angelic creature walked right up to me and practically hand-fed me a wafer smothered in molten chocolate. I nearly teared up as I spat out “Danke schoen! Danke!” with a stream of chocolate running down my neck. I can’t be positive, due to the semiconscious, dream state I was in, but I’m pretty sure she dunked the wafers in that god-like pool of chocolate behind her, marked by the golden cocoa pod, which I assume the praised deity of all confections.

I caught my breath, wiped the tears from my eyes and tried to remember how to hold my jaw up. Just when I thought I could survive chocolate heaven without treating myself to a nice case of type two diabetes, this happened.

I rounded the corner and BOOM! I’m in the tasting room where women are ripping wallets from their husband’s hands, dumping purses on the ground, bartering diamonds and trading children in for 10 pound bags of truffles. It smelled of nostalgia, dreams, and love-handles.

I caved. I bought the smallest (maybe second smallest) bag of truffles and found a seat on the riverside terrace for lunch. The server asked what I would be having and I ordered, “ein Riesling.”

That’s right. I ate an embarrassing amount of chocolate for lunch and washed it down with a glass of wine. I’m exploring new cultures. And I knew for the amount of chocolate I was planning to consume, I dare not waste precious stomach space with something ridiculous like a salad.

This particular truffle was the Rum Chocolate. I’ll just say I’m glad I snagged a picture of me before I broke the shell. I’m sure my face looked like an 18 year-old sorority girl throwing back her first jagerbomb. The thing was practically filled with congealed Sailor Jerry. Startling, but in a good way…

I’ll leave you with a strand of love locks, since I know you’re all probably dying to pummel me with punishing blows of envy after the chocolate covered torture I just put you through. If you didn’t get a cavity from everything above, the sweetness of this lovesick bridge should certainly do the trick. This was an extremely humbling bridge to walk across. As cliche as it may seem, to write or engrave two names on a lock and join it with a million others on a chain linked fence, it was surprisingly wonderful. It felt like a place of genuine romance. A place where everyone who knows and believes in real, heart-melting, stomach churning love can all be together. It’s nice to remind yourself what it means to truly love and be loved in return, and why it’s a joy worth advertising.

3 thoughts on “Wesel, Köln, and the wonderful world of Lindt Chocolatiers.”