Granada is a place of magic. Plain and simple.
I wasn´t even planning to visit the famous Pomegranate city until I met a few Canadians who claimed the streets were lined with Hookah shops and orange trees. I certainly couldn´t deny myself a healthy dose of flavored tobacco and fresh citrus; and holy rabbits am I glad I stopped here.

Every single view is breathtaking. The city rests at the foot of the Sierra Nevada mountains and is stitched with small creeks, streams, and three large rivers. As Granada was under Muslim rule for centuries, the city is composed of Moorish and Morisco influenced architecture, and most restuarants offer cous cous with raisins (Nom nom nom!). Granada is also home to the Alhambra, an Islamic palace built for the last Muslim rulers of the region. (A complex I studied for roughly six weeks of my college career, but again, I won´t bore you with a history lesson.)

You can see the Alhambra in the background of the image below, but its the small network of winding dirt paths just below the gorgeous palace that I´m eager to write about. These are the gypsy caves. It may be a bit difficult to see, but the narrow paths circling the dusty hills are entries into the homes of thousands of dread-locked gypsies. 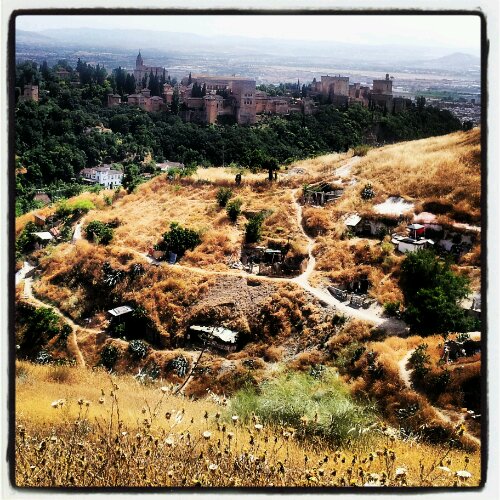 Most of the hillside dwellings were dug into the lime soil in the 19th century, but several of the hidden homes are much older. The community is in the Sacromonte district, which is the largest gypsy society in Spain. These nomadic characters wander around barefoot and stare holes through your forehead when you enter their cave-hood with a camera dangling from your neck. They want a free life, and don´t happily welcome gawking tourists meandering through their plastic lawn furniture and plush animal yard ornaments. 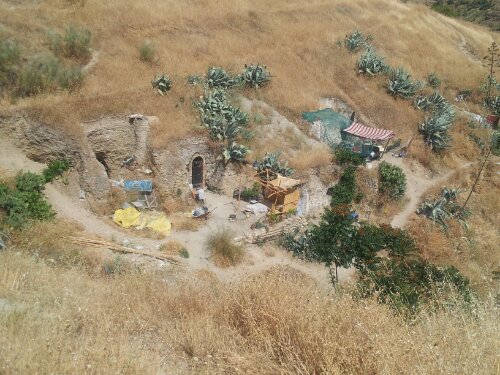 Even though the hill of caves felt eerily similar to a south Georgia mobile home park, I caught myself feeling a bit envious…

Don´t worry guys, I´m not selling my shoes or dreading my bangs to join this cult of nomadic artists. But I did appreciate, and even respect their sacrifices for a genuinely simple life. Plus, it didn´t seem like they were living life too shabby. I saw about three inground pools surrounded by wicker lounge chairs, and most of the homes with open doors appeared to be well stocked with kitchens and La-Z Boy recliners. Even though the Flintstone-footed free spirits were wandering around with holes in their baggy cargo shorts and mud in their hair, they all seemed genuinely content in their cool underground homes. At least when you plaster walls into a hillside you get a moderately cool climate to sleep in; which is more than I can say for the steamy air-conditionless hostel I´ve inhabited the past week. I think if I were forced to stay one more night in this 100 degree city, I´d just wrap my belongings in a bandana, hook it to the end of a cane pole and join these happy blokes. I´m sure they all sleep like babies in their cold caves while I´ve been doing a monotonous sway dance with an oscillating fan for 4 days.

Excuse me… Is that a Duncan Phyfe sofa in your front lawn? I don´t think it gets much classier than that. These hillbillies are doing something right.

I didn´t get the chance to explore the interior of one of these homes, but I did manage to score a seat in a cave Flamenco show. 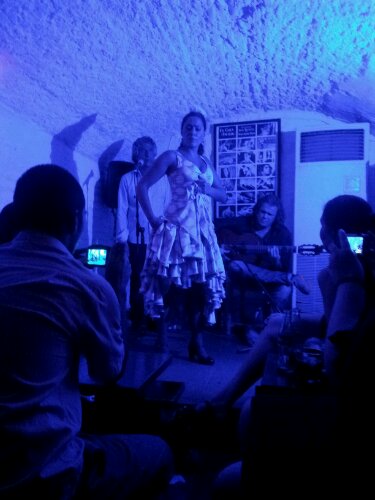 The Sacromente region claims to be the birthplace of Flamenco, hosting nightly shows in intimate caves for a lucky audience of about 15. If you wander the dirt paths after midnight, you may even be lucky enough to find a crew of gypsies finishing the final drops of a vodka bottle, snapping their fingers and stomping their heels in drunken impromptu Flamenco. This is the real tradition. Unplanned and unrehearsed. Full of passion and raw emotion, these roadside shows can last hours into the morning. I wasn´t brave enough to roam the hills after midnight, and I was a bit concerned my combed hair and freckles would be an obvious giveaway that I didn´t belong in the tight-knit community.

Maybe in another life I´ll trade in my tapshoes for a pair of Spanish heels and join the world of dance and liberation on the anthill of caves in Granada.

2 thoughts on “Granada: You see your gypsy… (I can´t fight the urge to sing Fleetwood Mac)”