Remember that train I missed in Granada, due to an over flexible right arm and undeniable patriotism? Well if I hadn’t missed that train, I never would have suffered through a miserable nights sleep in a vertical cement excuse for a rail-recliner, and I also never would have met the characters cruising with me to Italy today. 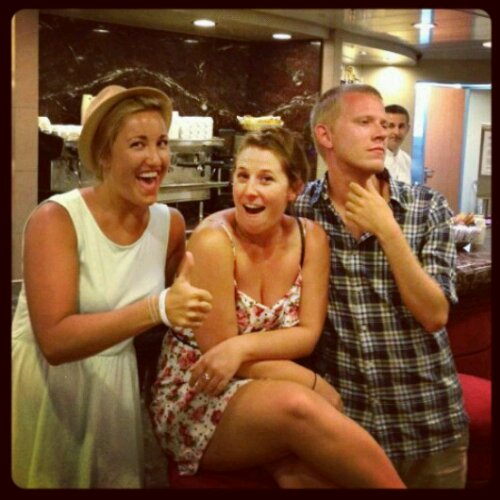 I met these two Americats on the train from Granada to Barcelona when I heard the sweet familiar sounds of a drawn out southern “riiiiiight” and “daaaaang.” I waited patiently, uncertain of the accent until I heard the word “ittenit,” at which point I spun around and demanded, “Hey! Where ya’ll from?” not needing an answer. I know Georgia when I hear it.

Christopher is a fellow bulldawg and Courtney is from Michigan; but she, like many others who venture below the Mason Dixon line, has had her heart blessed enough to be southern in soul by now. When we found each other at the train station yesterday, trapped in an endless line to book our tickets, we started discussing our routes, realizing we were on the same path from Spain to Italy.

Now, in addition to everything I have already learned about trains, I learned yesterday that rail maps are a bunch of malarky. All this time, I thought meteorologists were the only professionals paid top dollar salaries to always be wrong. Apparently, while the weather man sits in a back room sipping espresso making guesses about rainshowers on ouji boards and magic 8 balls, cartographers are playing a funtastic game of connect the dots and snake chaser with colorful sharpies when they make these rail maps. How do you get these jobs? I want to sit around eating pudding cups, doodling colorful scribbles on maps. Then they call it a rail guide and send it out into the world to watch silly backpackers stumble around in tearful dazes. I’m sure they all have cameras in stations and roar with pants-pissing laughter when they see us all wait three hours to book a train on a line that doesn’t exist. Okay… That was my rant. Back to the story.

After meeting another traveler who had been waiting roughly 3 hours already to book a train on a phantom rail, I decided to ditch the line and skip the trains. I can spend half as much time and 30 less Euros to hop on a cruiseship to Italy. And remembering my buddy Hayden’s wise words, I said to myself, “Cass, you can do whatever you like.” So I threw my ticket in the bin and turned to Christopher and Court asking, “Are ya’ll coming?”

Filled with hesitation, Christopher was silent. I had no idea I was confronting the Martha Stewart of backpacking… I mean professional planning. This fella had the most detailed itinerary I’ve ever seen. I’m honestly shocked it wasn’t laminated and bound in leather. But with a little kick in the hind and some subtle persuasion, I somehow managed to get Christopher to cancel their reservations and join me on the Cruise ship to Civittavecchio.

Its a 19 hour cruise from Barcelona to southern Italy, but it sure as cuss beats 17 hours on trains with 6 changes. (Especially given my luck with train swapping)

And instead of sitting in a spring loaded rocking chair on a metal tube, I get to sip mojitos by a pool all day while I change countries. Don’t get me wrong, I have thoroughly enjoyed my rail pass, but there’s something to say for open air travel. 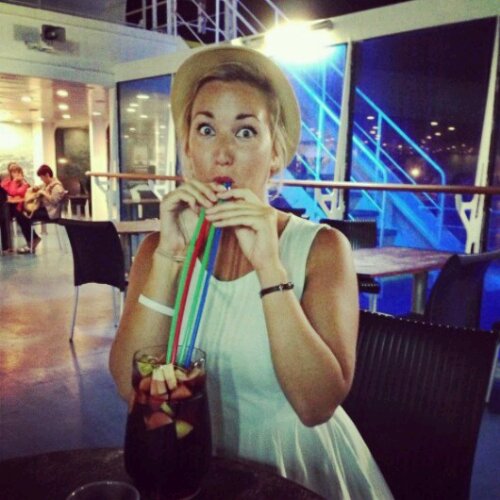 Now my only prayer is that we find a place to stay when we arrive in the port of Rome. I have somehow managed to wing my every stop thus far, but Christopher is starting to develop hand tremors and an eye twitch every time I say, “We’ll figure it out when we get there.” It’s certainly calming to know where you’ll rest your head each night, but its absolutely liberating to throw yourself into a country that doesn’t spit a word of English, and give your nerves a nice dose of reality. Force yourself to learn languages and rely on the pure and present kindness of strangers. People are not as bad as we try to make them. When I arrived in northern Spain, an old, aproned lady with flour dusted arms took my hand and walked me 4 blocks to a bed and breakfast. I used charades and snoring sounds to tell her I needed sleep, and she cheerfully led me to my evening home while speaking Basque; not even Spanish! That is real human decency and the epitome of genuine hospitality.

Sometimes we should ditch the turn ticket, step out of the line and find a different route. Even if you have to scratch something off of your list, you have to trust that something greater will replace it. Iggy Pop will carry me through the rest of my unplanned travels; “I am a passenger, and I ride and I ride.”

4 thoughts on “I am a passenger, and I ride and I ride”