Exactly one year ago today, I was smudging my greasy fingers along the touchpad keyboard of a smartphone, seated in a beer garden in Northern Germany composing my first long-winded blog post about sausage and existential epiphanies. It was my first week in a striped sundress, gallivanting through the world as an adventurer striving to become our world’s favorite cartoon traveler, Waldo.

Since May of 2013, I have solo-trekked through fourteen countries, swum beneath Croatian waterfalls, hiked Italian stone trails, slept on park benches and Spanish beaches. Eventually, I found my way home, leaving nothing behind but a microfiber towel and bits of my heart.

I realized this past weekend, on the treacherous Interstate drive down to South Georgia, that I have gone full circle. I have placed my feet on distant soils, dipped my toes in foreign seas, and witnessed beauty from varying landscapes. And now, one year later, I find myself driving to the swampy flat-lands of the southern wild for a weekend on the Altamaha River, to celebrate the birth of my lovely Daddy… or Pop… or Clyde, or Shirt-free-Cleve… Or the curly-headed, Busch and tomato juice-drinking, chicken-smokin’ fella known as Cleve Harden.

You won’t be able to discern the text on the small wooden sign dangling from the base of the porch, but the words, “Southern Comfort” identify the quaint, little River house on stilts that has been my Pop’s sanctuary for the past few years: complete with a fire-pit, a golf-cart on steroids and a newly added Pontoon boat.

As I drove through the gates at Carter’s Bight Landing, I rolled down my windows to take in a deep breath of that delicious river air. Only three or so gnats hit the back of my throat as the steamy air filled my lungs, while a flock of mosquitos decided to have a Mexican sized wedding party on my forehead. My eyes bulged and watered as I choke-coughed the gnats and bug-boogers onto the windshield. I could hear Jason Aldean blaring from pick-up truck speakers, and I grinned at the sea of people huddled beneath houses as dust from the dirt road clung desperately to my damp teeth. Ahhh… home sweet home.

The saying is, “You can’t put lipstick on a pig…” so I won’t. I can’t compare the South Georgia Riviera to Mediterranean villages or the south of France, but I can write a little diddy about the undeniably beautiful and unique lands surrounding the Altamaha River. The sandbars I grew up on, the food I shamelessly inhale and the people with whom I can relate.

Some say our river water is a shade of brown that resembles the ungodly depths of the holding-tank in a Porta-John. I like to think it’s the color of a tall glass of sweet, sweet tea. Or maybe about the same shade as a frothy Bud Light in a Mason Jar.

A weekend at the river generally begins with a breakfast of fried eggs, grits, and coffee you could float a horseshoe in. We “shoot the shit” for a while (have casual conversation), then scurry down to river after applying coats of bug spray in clouds so thick you’d think you were in Dolly Parton’s Beauty Parlor. We promptly boarded Pop’s new pontoon boat, where Momma Mim took on a new shade of Oprah and Captain Cleve was more than pleased to teach me the basics on navigating channels of a river. Apparently, my experience driving speed boats on bottomless lakes is about as helpful on the mighty Altamaha as a 15 year-old with a learner’s permit driving in NASCAR. But with the help of the captain, we found a luxurious sandbar with shallow wading pools and just the right amount of soft mud and toe-nibblers.

For reasons I have yet to understand, we all felt as if we had been fed sun-triggered muscle relaxers after spending a half day on the par-toon, so I took to cruising on the golf cart with my fluffy companion.

With the birthday boy in his trademark stance: Busch in hand, no shirt in sight and proudly checking the gage on a smoker full of chicken, a small crew of us gathered for supper. 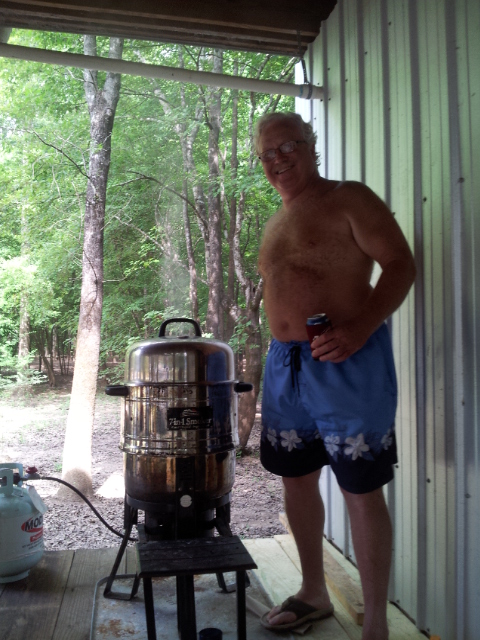 My Pop is great at many trades, but his mastery of the smoker is one culinary artistry that is attempted by many, and perfected by very few. It takes attention to detail, measuring hours in the amount of beers consumed and the unique ability to melt the knuckles off of a drumstick until the meat is dripping with juices and sliding down the bone.

The river is a land of tan lines, some from bikinis and some from cut-off muscle shirts. Men wear beards instead of neckties and ladies don’t put maraschino cherries in their glasses.

We pass around jars of real Moonshine and eat boiled peanuts from the can, while the dog on the dock licks the salty shells scattered behind rusty lounge chairs. We eat homemade peach ice cream, churned by the folks down the road. 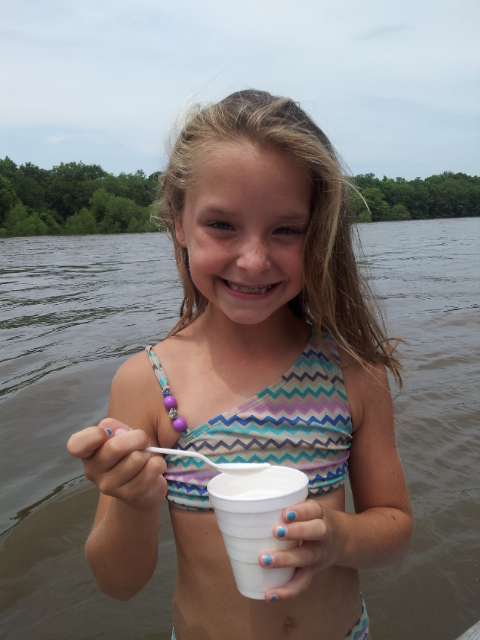 Our accents are as thick as the sand gnat clouds. It may be hotter than the bottom floors of hell, but southern girls don’t sweat. We glisten in the sweltering heat, and we never meet a stranger. I have ventured to many shorelines, seen paradise in various countries and witnessed proclaimed world wonders… but sometimes, it’s damn hard to beat a weekend in the South Georgia Riviera in the company of a handful of slow-talking southerners.

21 thoughts on “The Altamaha River: A Southerner’s Paradise.”