Skip to content
Press Enter / Return to begin your search.

I met David in India in 2014. We sat on a rooftop and talked about travel, whisky, and Walt Whitman. He also has a majestic beard. Naturally, I was a fan right away.

We were friends for quite sometime until one day last January… I drank an entire bottle of wine before deciding to FaceTime him (for the first time ever). I fell asleep before hanging up, woke up mortified and then BOOM. he was of course, smitten. (Believe it or not, there’s a bit more to that story but I’ll save it for another day of unsolicited gushing.)

Anywho… We decided to play this incredibly fun game called the long-distance relationship and recently decided it was time to meet each other’s parents. And siblings. AND best friends. All at once. 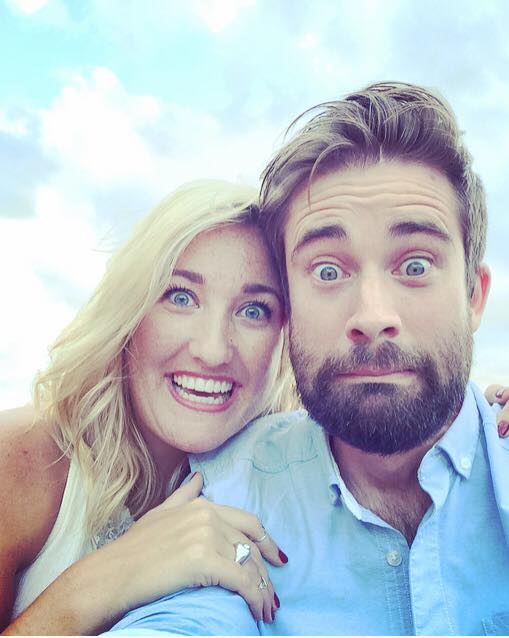 Though few and far scattered, there are a couple of perks to long-distance relationships. One being: This level of commitment ain’t no joke.

When you’re dating someone who lives on the other side of the railroad tracks or even two transfers away on the subway… sure, you seemingly commit. You commit a Thursday evening to meeting her friends at the pub for team trivia. You may need to plan a Saturday night next weekend for dinner with her parents when they’re in town. It’s even possible that you attend a party where you need to mingle with your significant other’s dreaded extended network of acquaintances and– ugh, that friend of a friend.

But when your significant other lives across the ocean… you’re not just popping in for a quick hello. You don’t just casually stop by because you’re in the neighborhood. Everyone knows you’re nowhere near this hood. You had to cash in six years of accumulated Skymiles for this dinner party. You get to turn in those hard-earned vacation days for a holiday in your beloved’s hometown. It’s basically just a multi-tiered, scaffolded interview with 8 levels of opinions from siblings, in-laws and first-love-besties. This my friend, is commitment.

But even knowing the commitment was there, I couldn’t help but feel a pang of panic run through my veins when David was en route to South Georgia. I tried to assure myself that everything would be fine considering I had just survived 3 days in Essex. Meeting the Scotts, dining with mum, and mingling with friends. I had survived unscathed. The only thing I notably regretted was the moment I anxiously handed his mother a “please like me” gift while simultaneously shouting out “IT’S A CANDLE!” Oh, here… let me give you a gesture of sweet surprise, but wait… let me smash it first. And yes, the candle is tobacco scented, just because I was hoping to suggest I have an affinity for lip dip. Cheers. (Good thing I bought a back-up candle of patchouli and claimed it was all a mistake).

Soooo, overall, my 3 days in Essex went swimmingly. I felt at ease, welcome, and sure of my happiness with the bearded human next to me. But as David coasted into the runway of the southern wild, I had a startling realization. He would be in Georgia for ten days. TEN. DAYS. With my parents, cousin Ginger, aunt, uncle, my sister, brother-in-law, best friend… and most importantly- the nephew.

Would he feel welcome? At ease? Sure of the freckled peach next to him?! I mean, if there’s one thing southerners are proudly known for, it’s genuine hospitality. Surely, he’d feel welcome at least…

But the thing is, David is a… ahem, umm… vegetarian. And while southerners are acclaimed hosts and notorious for never meeting a stranger… we also don’t love having to accommodate for other cultures. We’re all about showing off our culture, welcoming you into our way of life. And while my parents were fairly prepared for the English culture to come a’knockin, they weren’t quite ready for the veggo culture.

Admit it Miriam. When have you ever cooked a bean without a ham hock? Or fried an egg in oil instead of bacon fat? And you must admit, you’d sooner lie about it than alter your hand-me-down recipes to accommodate the elephant in the room.*

*Within 30 minutes of David’s arrival, Momma Mim said it was time to “discuss the elephant in the room” — David’s vegetarianism. Disgusting.

But aside from consistent slaps on the back, mocking, questioning, and temptation, my family managed to welcome our first vegetarian into the family. Hell, Pop even let him hold the smoker rack as he turned the drumsticks. Nothing says, “Welcome to the Harden family, son” like helping Pop tend the ‘que. (Bless his quivering, drooling jaw he did it.)

And even though no one really understood a word David said at least 78% of the time, he walked away apparently feeling quite at home and welcome in our deep-fried, carnivorous world. And the Harden’s learned a lesson or two in new cultures. Mim even boiled the corn in a pot separate from the shrimp heads. Baby steps, folks. Baby steps.

Sure, long-distance Facetime dates, booking international flights, using the last of his holiday to spend ten days in mosquito county should be sign enough of commitment. But it was truly David’s pledge to survive gleefully on deep-fried root vegetables that assured me he’s up for the challenge of dating a Georgia girl. And I’ll try to return the favor by promising I’ll learn to make a pie crust without using hog lard. And I’ll never… siiiigh, cook a greens with a thigh bone again (unless, of course, I make a second pot).

And so… the merging of the cultures begins.

Originally from a small, cozy town in south Georgia, I currently live north of Atlanta as a starving artist on the side with a pseudo adult career that is ever-changing. As a result of my heritage, I find shoes oppressing and pickles a delicacy. I'm country, plain and simple. But despite my slow drawl and bewildered smile, I'm an unyielding adventurer unable to settle, with one bag packed and five fingers always on the doorknob. I currently have a job that allows me to enjoy two full months off every summer. In true generation Y- youthful dreamer fashion, I decided to cash in my savings and buy a plane ticket to Europe. With a few bucks in my pocket and a couchsurfing profile, I'll be wandering solo for 10 weeks, in search of strangers with welcoming arms and restaurants with "work for food" signs taped to the back door. If need be, I'll build a tambourine made of spoons and twine and join the local bands for spare change. Join me in my attempts to merge with the crowds, lose myself in new cultures, and find my evolving identity in a world desperate to be explored. I won't be wearing a red scarf, but I will have a conspicuous red backpack and a Waldo-esque sense of adventure. Follow me through the chaos! View all posts by becomingwaldo

3 thoughts on “Meeting of the ‘Rents. Merging of the Cultures.”