Having strayed numerous times from my original itinerary, I was near certain I would have to cut Budapest from my list of Eastern European must-sees, as the looming spirit of deadlines continued to rob me of my precious days abroad.  But Lauren and I decided to leave Croatia in a mad dash to Hungary, as we somehow found 42 precious hours to shimmy Budapest into my final week, sandwiching one full day of luxury between two miserable nights on trains. (I could hear The Kinks playing in my ears as we reenacted the final scene of The Darjeeling Limited, sprinting down the marble streets of Split toward the train station.)

We had no sites to see, no museums to peruse, just one plan for our single day in the heart of Hungary…

Budapest is home to many public luxury baths, which are basically American day spas with a major facelift and quarter-price entry fee. The palace was tastefully ornate, filled with golden statues of seductive goddesses and tapestries of lounging Bacchus.

After nine weeks of slumber on mattresses made of slinkies and cottonballs, sleeping bags on beaches, and medieval torture chairs disguised as rail recliners, I needed this spa day. And to my eternally grateful delight, I didn’t have to sell my left kidney on the black market to afford it.

The general entry is about the same price as a public pool ticket in Tuscany, but this mansion offers outdoor pools of varying temperatures, treated with vitamins and minerals to nourish your skin while you tread water.

When you tire of splashing about in a pool of Emergen-C, you can walk around with one hand on your lower back and a small girl will approach you with offerings of massage packages for the same price as a single armpit wax in America.

I suppose the young girl selling these packages noticed the Bilbo Baggins size stumps that God kindly glued to my ankles, because she ran over with desperate offerings of pedicures for me. I glanced down at my feet and saw that my pinky toe had shifted back to my heel and my big toe looked as if it had met a cement parking guard a few times too many. 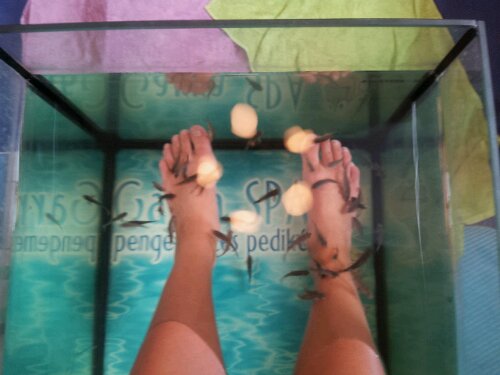 I wasn’t quite sure what I was spending 3000 Hungarian Forint on, but I knew it was the same price as a mojito and my hobbit feet would sincerely thank me. I was beyond thrilled to walk into a tiny room where the canned-sardine-air shoved two stinky fingers straight up my nostrils. I have always wanted a fish pedicure, but I have yet to find one in the States that didn’t require my signature on a black Amex.

The tiny fish, called Garra Rufa, are hungry little critters that conveniently love dead skin. My poor feet, having just carried me triumphantly through eleven countries in eight weeks, were swollen and damaged beyond recognition. The kind, toothless nibblers clung to my skin and caressed my toes better than any pedicurist has ever done. I walked out with a whistle in my lips and a brand new set of kickers to shuffle me through the next week.

As I waited for Lauren to finish her full body massage, I proceeded to the indoor saunas, where I nestled my aching hiney into a steam bath. There were men playing chess on floating boards and old women gossiping in a language I couldn’t make heads or tails of. For fifteen minutes I inhaled the steamy air and again, thanked the universe for leading me to this part of the world. I realized I was beginning to succumb to the steam when I noticed my ears were suddenly filling with water and my bottom eyelids were starting to puddle beneath my chin. In a momentary panic, I gathered my drooping face in my semiconscious hands, wondering if I had been snoozing in a hot bath of chloroform, and scurried out of the steamy pool, stumbling on my earlobes along the way.

I laid in the cool hall for a bit and tried to push blood back to my upper extremities. When my legs were no longer water balloons, I walked along a corridor that reminded me of the winding halls of Marmoreal palace from Alice in Wonderland.

Just around this bend, with no Tweedles in sight (everyone remembers these Wonderland characters…right?), Lauren and I enjoyed friendship exfoliating facials… Because who needs bracelets when you can lounge together in a Hungarian day spa and share 25 minutes of temple rubs? It was incredible. The young masseuse squished my chubby cheeks toward my nose and smacked the wrinkles from my brow line, ever so gently.

After 3 hours in the luxury baths, Lauren and I begrudgingly left the yellow palace and re-cramped our spines with heavy backpacks and neck-creaking satchels. We bid farewell to an emmaculate city after a painfully brief affair and headed north to Prague.

But if the good Lord will’s a marriage in my hopefully-distant future, I shall return to Budapest for what will surely be an epic bachelorette party… or a birthday party, or bat mitzvah… or really, any reason to party in Budapest will suffice.