I have a bachelor’s degree in Art History.

Yes, I spent five years of my life, memorizing slides, monotonous dates, and the varying shades of Burnt Siena. The thought of this, I’m sure, makes many of you want to stick the blunt end of a number two pencil in your left eye socket; but I absolutely loved it. And as I struggle to establish a sound career as an art auctioneer on a cruise ship (I tried), or a plaid skirt-wearing gallery host, I have realized that I am a fan-freaking-tastic person to travel the world with. I may not know what currency I need to be using, or which train will get me out of Spain, but I could walk you through each corridor of the Alhambra (the Mausoleum of which I have written a pending post). And I was even paid 20 Euros by a small Dutch family to talk them through the Louvre for one hour. My point is, for a degree that is seemingly worthless, my education has proven quite helpful when venturing through the world without the Idiot’s Guide to the Renaissance in hand.

So even as I’ve spent the past two years, post-grad, cursing my student loan debt and blaming the baby-boomers for deceptively encouraging me to “study what I love,” I learned to genuinely appreciate my degree as I was trotting through Europe, with a base knowledge of nearly every museum and Cathedral I encountered.

But then I entered Prague. And as it turns out, I know nothing of Prague. I knew it only as the land of a majestic green liquor, poisoned by green fairies and masked by licorice (Absinthe). I knew of some tasty beers from Czech Republic, and I vaguely remembered studying art nouveau salt cellars in a Decorative Arts class. But that was it.

So when I waltzed up to this magnificent work of art, I was ashamed to stand before the churning dials and golden hinges as an art historian with no prior knowledge of its existence. How could I have never read about the Astrological Clock of Praha?

I stood gawking for about ten minutes, turned to Lauren in a moment of shameful defeat and pathetically proclaimed, “I don’t know anything about this. How is that possible?” (Apparently, I’m not quite the Gertrude Stein I thought I was).

Later that night, Lauren and I met up with my old friend Lisa, who now lives in Berlin, Germany. She and her boyfriend, Jonas, had cleverly joined the Prague walking tour earlier that morning where they learned a few details about the clock. The fact she mentioned first, however, was that the tower is said to be top on the list of “most disappointing” sites to see in Europe.
I concluded, from a bit of smart phone research, that the “disappointment” is not referring to the clock itself, but to the moment everyone crowds around the giant compilation of exposed gears, waiting for the machine to come alive. The golden rings grind together as the public time-piece becomes the original version of a koo-koo clock. In the morning hours, every hour, the clock becomes a theatrical rendering of the procession of the twelve apostles, following Christ through a brass set of robotic, swinging doors. As I’m sure this is no elaborate display of Cirque du Soleil acrobatics in the form of mechanical saints, I would think the clock itself should still be appreciated as an incredible work of genius, having been created in the 15th century. But as I did not witness the show of the city’s wristwatch, so I cannot attest to its impressive display.

But I will say, I find it hard to believe that a work as intricately crafted as this could be on a list branded as “disappointing”.

Walking the streets of Prague felt like walking through the real Disney World. The streets are not only cobblestone, they’re patterned swirls of art deco inspired rings, merging with semicircles and crescent moons of thoughtfully placed stones. 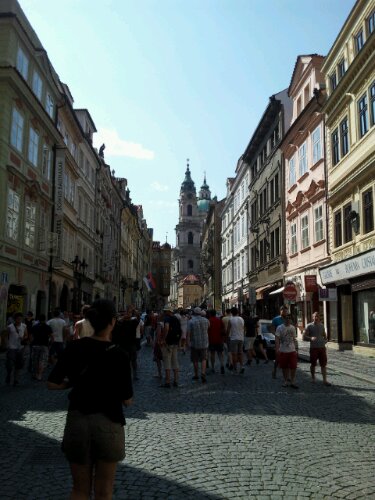 We wandered a bit, staring at the colorful architecture as I took quick photos of Lauren’s hiney swaying gracefully through the crowds. And then we found the markets.

With only four days left in Europe, I was down to my final pennies and I had reserved a five dollar Lincoln in the back of my wallet to ensure I could buy a giant coffee upon my return in the Atlanta airport. But even as I was counting the last of my cash, I found a few extra Czech Koruna to spend on miscellaneous goods. The markets were flowing in fruits, crafts, art and Czech wafers. It was all I could do to refrain from buying boxes of these cheap, flaky cookies. The flavors were temptingly unique, ranging from Coconut Banana to White Chocolate Marzapan. I caught myself wandering by the same stand about 13 times, creaking my neck slowly and staring like a three year old walking by a fudge shop.

Aside from confections, there were dolls, puzzles and various doo-dads.

We spent nearly two hours rummaging through the stands, heckling with craftsmen and scavenging tasty wafers set out as samples. The city was nothing shy of gorgeous, and every block led to another of equal or greater beauty, offering fountains or monuments in each square center.

We called the day a success and returned to our block to nurse our throbbing Achilles tendons and water our bodies with brews of yeast and hops. Following the recommendation of our concierge, we entered a copper heaven known as a Czech brew pub. The window sills were filled with dust coated brown beer bottles, absent of labels and welcoming to lager snobs of all parts of the world.

I will tell you now, I have had an ongoing love affair with the bitter, brown fella known as beer since I abandoned my adolescent obsession with Natty Light and began work in a microbrewery in Athens, Georgia. I discovered the existence of dark, hoppy lagers and sweet, smooth stouts. Indian Pale Ales became my lover at the tender age of 21, but his need to fatten my waistline and cling to my thighs forced a heartbreaking separation.

But with one look at those shiny copper tanks, the smell of live, active yeast filling my lungs, I gave in and ordered a flight. (Calm down, Lauren and I shared…)

This is my advice on beer sampling. No matter where you are, be it Bruges, Belgium or Boulder, Colorado, never order a Bud Light in a brewery. Trust the brewmaster. Trust the artistry and the passion that goes into every pint. Order a flight of beer and sample every flavor. Just because you hate Guinness does not mean you hate stouts and porters. Also, ask your server if they recommend an heirarchy or order in which to sample each brew. Just because a beer is lighter in color does not mean it is light in flavor.

Since I have been known to spend the occasional Sunday afternoon in breweries, reading the Ale Street Journal, I’ll give you my basic lesson in beer. There are two types of beer: Ales and Lagers. Czech beers will almost always be lagers. The main difference is that lagers are brewed with a bottom fermenting yeast, that ferments in a cool environment and sinks to the bottom of the tank. Ales ferment quickly at warm temperatures, with a yeast that rises from the bottom to the top of the tank during the process. Because of this, lagers are generally milder in bitterness, but fantastically robust in flavor. This also means a lager can take on unique flavorings such as banana or cherry without being masked by intense hops. Thusly, never judge a beer by its color. It may look dark and intimidating, but that could be a rich, burgundy cherry tinting the brew.

So Lauren and filled our bellies with tasty lagers and shared a sampling of small plates such as warm bacon dumplings, beer cheese and toast, and sweet red cabbage. The bacon dumplings were doughy shovels for the decadent bowl of goulash we inhaled. Between sips of the dark lager and banana brew, I dribbled the beef and potato stew down my chin and licked the gooey beer cheese from my knuckles. It was a fantastic finale to a wonderful few days in Praha.

After dinner, we ventured out to a bustling city square where crowds of people sat cross-legged on the warm cobblestones, sipping tall boys of local beer. As a final stop in Europe, before returning to Berlin for a long flight home, Prague bid me lovely farewell.

And I couldn’t have asked for better friends to experience the Czech wonderland with.